It’s all about shy sellers – not nervous buyers

The dynamics of the current housing market are extremely complicated. It’s a fundamental principle of all markets that values are predicated on the balance between supply and demand, but one other important factor is volume. As supply falls, activity wanes and potential market entrants think twice, waiting for conditions to improve. Eventually we reach a moribund market where the effect of low transaction volumes balance the effect of the shortage of supply and prices stabilise.

The extremely low level of properties coming on to the market is difficult to explain. Consumer confidence remains positive, mortgage products are plentiful and competitively priced and the economic outlook is relatively settled. Yet, the number of active sellers continues to fall in many regions around the country.

According to the HMRC, just over 1.2m homes with a value above £40K were sold in the UK last year (I have estimated the December volume at 110k), almost exactly the same as in 2014. It seems that the climb in volumes since 2012 has stopped and the market has found a new level – a level that is still a very long way short of the pre-recession years. In 2006 almost 1.7m residential properties were bought and sold. 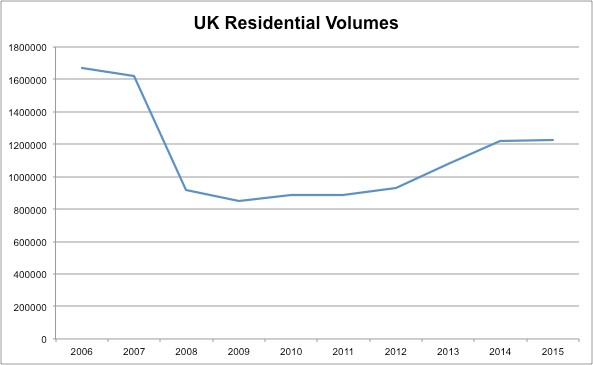 I feel the same thing has happened to values. The excellent Nationwide three months averaged price movement chart below is a perfect indication of how the market adjusted through the second half of 2014 and stabilised in 2015 at an average annual price growth rate of 4.5%. While there are a number of factors worthy of consideration when assessing what prices will do this year, I am firmly of the opinion we’ll see that steady, much more sustainable level of price inflation throughout 2016. 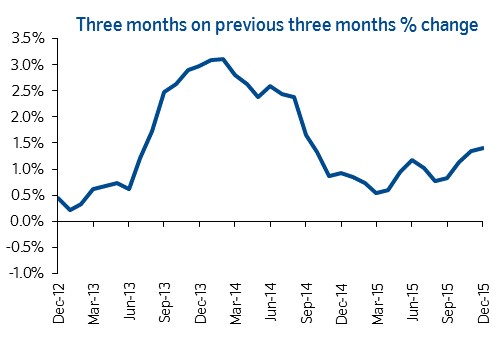 The Chancellor’s decision to hike the tax taken from Buy to Let owners will undoubtedly have an effect on the market. From April of this year, buyers of second homes will be hit with a 3% stamp duty penalty and, in 2017, there will be a substantial cut in tax relief of landlords’ mortgages. Opinions vary on the severity of these measures but some commentators have voiced fears that upwards of 200,000 properties will come onto the market as landlords rush for the exit.

There will be an effect on the market certainly but I don’t think it will cause more than a ripple. In fact, an influx of reasonable quality second hand stock on an under-supplied market will probably have a beneficial effect. Estate agents’ stocks are currently at an all-time low and the RICS survey suggests that it is getting worse rather than better.

There has been much discussion about the timing of the inevitable interest rate rise. However, inflation continues to stay at historically low levels and doubt remains over the state of the economy, and if that remains the case, there’s every chance that we won’t see any rate rise in 2016. And even if there is a small shift in rates – and that’s all it would be if it happens at all – I believe its effect on the market would be limited. A very high proportion of mortgages are fixed rate and even for those that aren’t, we’re coming from a very low base. I don’t see interest rates being a significant negative factor in 2016.

The hugely successful Help to Buy scheme has been extended and we’ve seen the introduction of Help to Buy London with limits increased to take account of the much higher prices in the Capital. Rents continue to increase alarmingly and that will surely make buying the preferred option for most, especially with interest rates where they are and the competitive nature of the mortgage deals currently on offer.

I get the sense that there is a genuine stability in the market. Substantive shifts in either volumes or prices are unlikely. So, while I feel confident that volumes will increase over 2015, it will not be by much. Equally, while I am completely confident we will see a rise in average prices in 2016, all the evidence suggests it will be mid range, single digit inflation.

All things considered, I predict we’ll see average monthly volumes of over 100,000 for the UK, with the 2016 total just short of 1.3 million. I believe the new homes share of the total market will stay close to its long-term average of around 10.5%.

So where will prices go as we watch volumes creep upwards? Crucially, consumer confidence is high, despite the fact that some of the press and the politicians would have us believe that a recovery built on debt is an unsustainable recovery. It’s worth taking a look at the latest Ipsos MORI Halifax Confidence Tracker. Although it relates to Q3 of 2015, its results are conclusive.

68% of their respondents predicted that the average UK house price would rise over the next year, while only 5% forecasted a decline. Their headline ‘House Price Outlook’ balance (i.e. the difference between the proportion of people that expect house prices to rise rather than fall) stands at +63. In previous years, this level of positivity has resulted in double digit price growth. For all the reasons I’ve cited above, I don’t believe that will happen, but, if the vast majority of the market think prices will improve…. guess what happens… yep, you’re ahead of me, prices improve. That’s how markets work and that’s something that is difficult to argue against.

Macro economics also play a part in the UK market, particularly in London and, as the saying goes, if London sneezes the rest of the UK catches a cold. Stock markets around the globe appear nervous and we are also only just starting to learn that an ultra-low oil price isn’t all good news. If the torrent of foreign investment in London property slows, that is bound to have an effect but predicting global economics is way beyond my remit and I’ll base my thinking on a neutral global effect. On that basis, then it is impossible to come to any conclusion other than that the market will continue to move up in the first two quarters of the year. And if mortgages remain available and interest rates stay low, the second half could be even better, especially if the volume of transactions increases, as I believe it will.

I have already written about the dangers of forecasting beyond six months ahead, after which any prediction is based on any number of assumptions, but it is difficult to see anything other than a steady and sustainable rate of inflation for the whole of 2016, at a similar level to that we’ve seen over the past 12 months.

For our UK average index value, in the first quarter I predict an increase of around 1.25%. I believe that the rate will slow very slightly in Q2 and I anticipate the annualised increase staying at around 4.5% by the half year. The market in the second half will depend heavily on decisions made by the bankers and politicians, but provided we don’t see any truly extraordinary events, I see the increase remaining steady for Q3 and Q4 and the final UK average price (according to the Nationwide index) increasing by between 4% and 5% for the year. 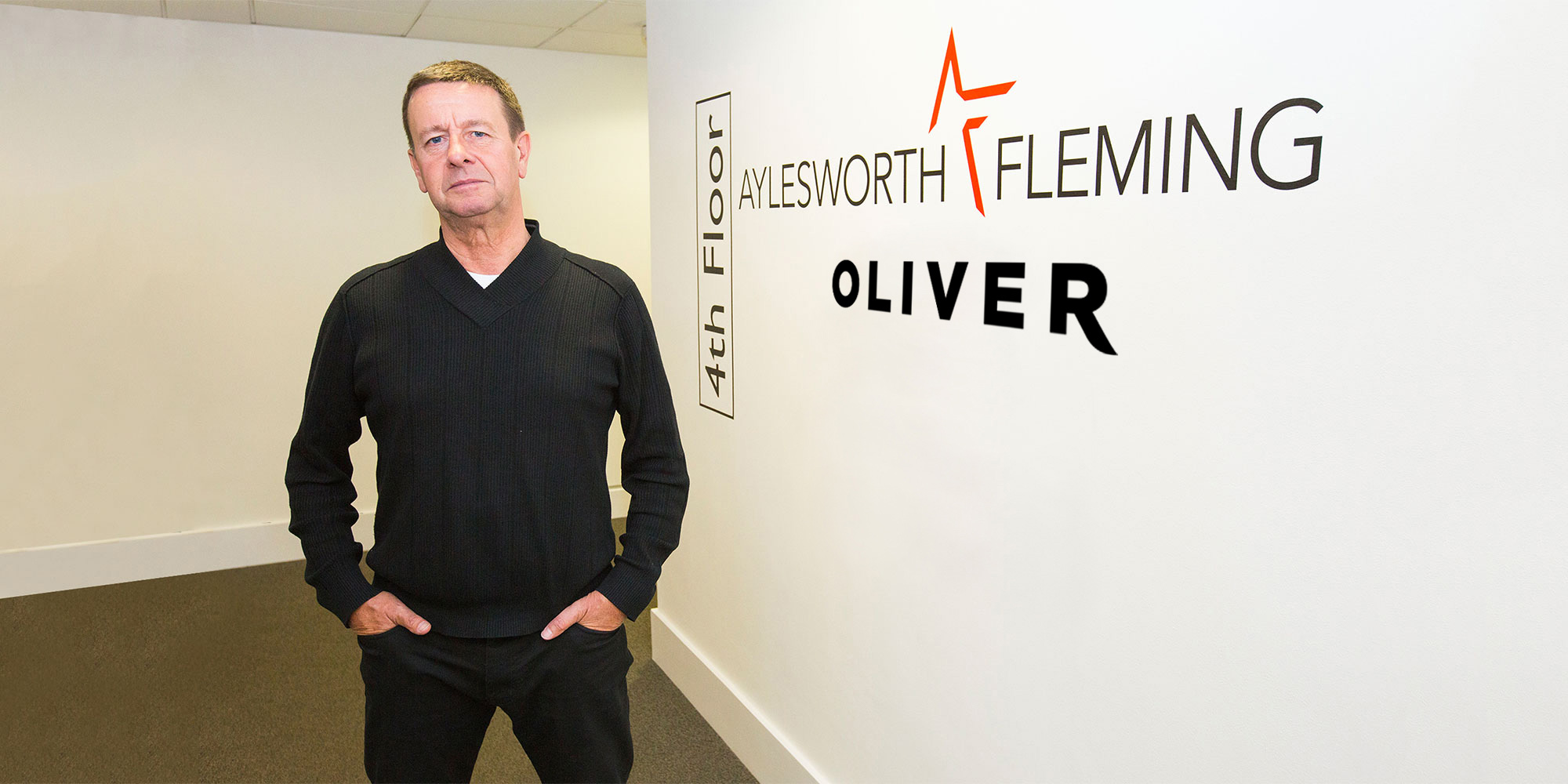 Since 1985 Matt Fleming has been CEO of Aylesworth Fleming Limited, a property marketing specialist agency. He works with many of the UK’s new homes developers and the country’s major estate agencies.